In real life people have and use a variety of list-like abstractions: shopping lists, bucket lists, and to-do lists, to name a few. These abstractions and the way they are used have two things in common:

The shopping list is an abstraction because the items on the list are the names of the real-world things to be purchased, not the actual things themselves.

In a similar way, computers have and use real-world abstractions by combining:

The term  "list iteration" means performing the same processing steps on each element of the list, one element at a time. 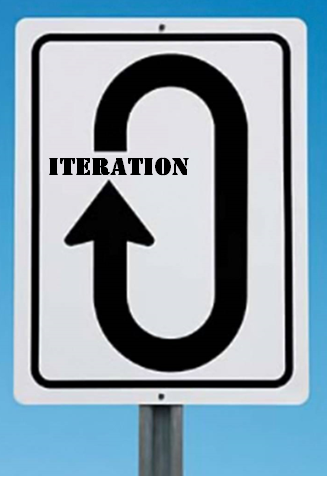 An important fact is that the same list iteration can process a list with only a few value or a list with millions of values! The ability of list iteration to process a list of any size gives computing its "power". Many machines generate physical power by performing a mechanical action repetitively: the repetitive motion of the pistons in an internal combustion engine generates the physical power needed to move a vehicle. By analogy, the repetitive processing of list items by an algorithm using list iteration generates the information processing power needed to analyze abstractions having many - perhaps a very large number - of instances. Imagine computing the average household income from the U.S. Census data. The abstraction of a household is a list of household's incomes, but there are tens of millions of instances of this abstraction. List iteration is critical in this case because it allows the same steps to be repeated for each instance. Using list iteration simple quantitative measures, like an average, can be computed for the values in the list.

Interactive animations will be used to explore the dynamic process of list iteration in three steps:

Step 1: an "iteration variable" holds each successive value of the list; a set of actions are performed with each new value

Step 2: the value of the iteration variable can be used by the actions performed on each new value

Step 3: the iteration variable and other variables in the program's state can be used in the actions to compute a quantitative measure of the list.

Generally, in the animations:

Each animation has controls to move the animation forward (>), backward (<), to the beginning (<<), or to the end (>>). A pair of numbers in the upper left-hand corner shows which slide is currently being viewed and how many slides there are in the animation.

Step 1: an "iteration variable" holds each successive value of the list; a set of actions are performed with each new value.

Step 2: the value of the iteration variable can be used by the actions performed on each new value.

Step 3: the iteration variable and other variables in the program's state can be used in the actions to compute a quantitative measure of the list.

The ideas of accumulation and initialization are illustrated in the following interactive animation that computes a simple quantitative measure (the sum of the value in a list).

An example of a list in BlockPy is shown in the following figure. The arrows in this figure show how the blocks would be assembled to form a list of three numbers that is set as the value for a property. The create list with block is found in the Lists menu. The numbers are in the Values menu and the set block is in the Variable menu.

To remove list elements begin by clicking on the blue colored gear icon. In the editing menu move a property_name block from the list group to the gray area to its left. This will shorten the list group and remove the corresponding slot from the create list with block.

Run this program (using the Run button) and observe the output displayed in the Printer box (immediately above the BlockPy canvas).

Experiment with the above workspace to

The Reset button can be used to restore the workspace to its original condition. Resolve any questions or issues that you encounter in working with this simple list.

Below is a second BlockPy work space that a program to compute the sum of the elements in a list. This program expresses in BlockPy the same iteration as the third interactive animation above. The blocks to perform addition (and other mathematical operations) are in the Calculation menu.

Run the example algorithm and observe the output that it generates in the Printer area at the top of the workspace.

The critical importance of iteration is that it works for lists of any length. Using the above work space add several more elements to the list and observe that the iteration without change works for this longer list.